Thank you for the sketch!

Some years ago Liselotte Eriksson sent me a sketch I wanted to finish and there it is!

A fairy in her habitat accompanied by a unicorn. 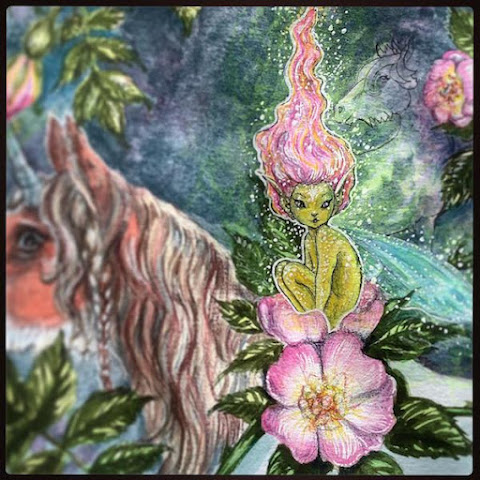 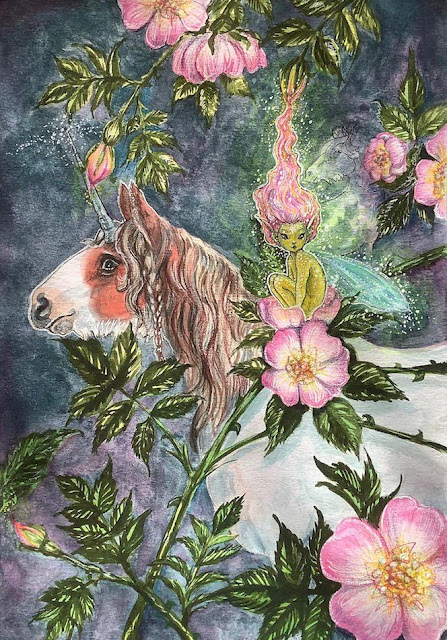 Praise you Liselotte Eriksson! Round 2 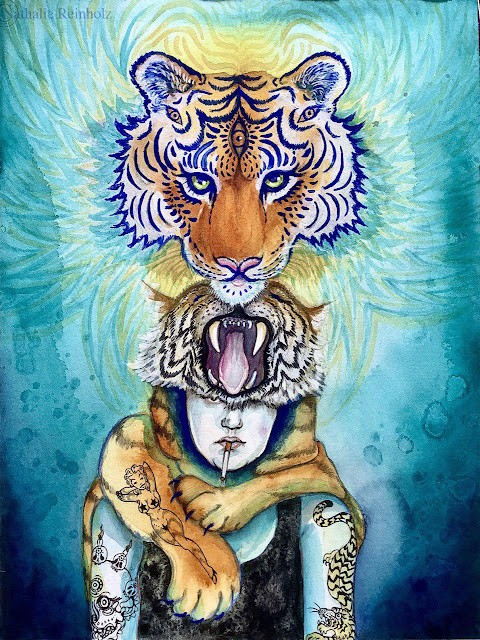 My elaborate plan (of which I have many) and my idea (even more) is to write about art, introduce artists and their projects and me myself paint a portrait of said artist.
How hard can it be?

Totally hard! I needed three months to finish the first portrait and will introduce Liselotte Eriksson again! She has another Kickstarter!


This time with cats!

I still don`t know why she is not totally popular and rich. Ok, maybe I know and for the second part, this blog shall be about art and why art is one of the best magic that humans have in this world!

"Art washes from the soul the dust of everyday life"!
Picasso

Now many a people are getting it a bit more as they have to stay at home. (I shall still go to work tomorrow).
How would life be without art in a broader sense, without the music, the pictures, the films, the adds, the colours even? Damn grey and boring, besides nature.
We are taking both for granted! Actually so granted most do not want to pay for it.
More about that in another post as Liselotte Eriksson wrote some good texts about it.

(P.S.: I follow Liselotte Eriksson for almost 20 years now. Starting in the Elfwoods and following to many places. I bought many an original pic as she is doing what I love to see, especially but not limited to Fantasy creatures. I really like her openness about her struggles. No gilding but telling as it is. As human, as artist and it is not always easy.
I am looking forward to seeing more of her art - whatever may come. The picture is based on a photo of hers, as well as some more resources.)
Thanks for being a great artist!

As art lover, art aficionado, art collector, artista and so on, I wish to start a new project.
I got so many ideas alas not much time.
I like to write and I miss writing as I did when way back I had more time.
Art still is one of the most important things in my life.

My first contribution shall be that I post about my fav artists.
Every now and then as my demanding day job as art therapist in a clinical setting takes a lot of my will time.
I plan to paint portraits of my fav artists as well but time was too short especially for this one!

I followed Liselotte Eriksson for some years now starting will Elfwood in 2002 or so.
I read her Livejournal I think, watched and faved on Deviantart. Nowadays it is Facebook, Instagram and especially her Patreon site, where I support several artists.

She does great photography, draws, paints, photo manipulates, seems to have great friends and family that pop up in her art. Topicwise it is enchanting, fairy tales, fae, swedish folklore, fierce nakedness and sexuality. Mushrooms, toads, fauns, mermaids.... you name it. There are painted stones and sculptures too. She made booklets and has probably more ideas than she can ever realize, as most artists have.

I bought several pieces of hers over the years that I know her art. She writes open hearted and it is always good not to only hear about successes but the hard times too. Artist life often is a hard life and as art really is magic and enriches everyones life I think it should be lighter and easier and much better paid :D
I shall write more about art and artists in posts to come.

Now is the best time

She just launched a new website! Here it is!


The kickstarter: A boardgame with her art runs just a few more days!

Once upon a time - Neil Gaiman

I always loved the Sandman and the books of magic and a friend of mine as well. So we had an adventure - see for yourself: 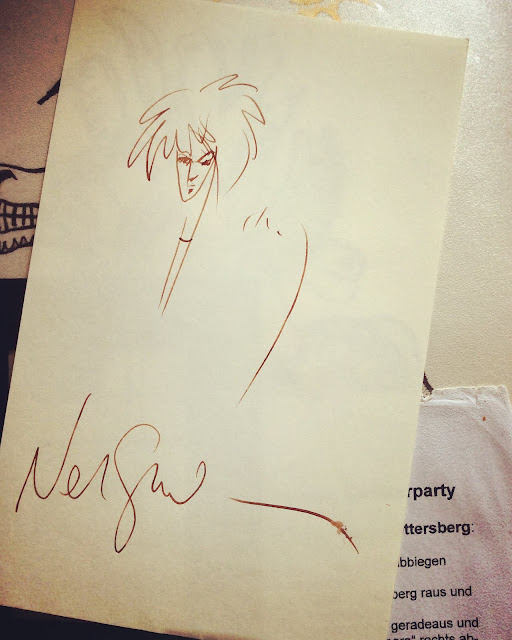 I had the luck to meet Neil Gaiman once.
It was more than ten years ago and a friend had bought tickets for a reading of American Gods in Göttingen. Neil Gaiman in Göttingen!
The town not far from where I came from!
Sadly I just had started to study somewhere else. My friend visited me and picked me up.
I had started to get sick the night before but I would go. Puking on the Autobahn, shivering and fever would not stop me.
A long queue and a place in the front row, as far as I remember. Some german actor read terribly, someone introducing Mr. Gaiman seemed to think he drew all the comics.
Nevertheless there I was and happy at that.
Even better we could queue again afterwards to a signing hour!
We had nothing to sign and no camera. I have no idea why I had no idea and blame it on the sickness.
Neil Gaiman was as nice as imagined and we had some sketch paper at least that he would sign for us! And thanks for the drawn Sandman.
I even had planned to give him a cheesy Delirium pic I had drawn :D Nevermind.
We got home afterwards and it was a horrible sickness night. Thanks to my friend and that we went anyway. I will probably not have the chance again.

The pub the signing was I remember as dark there weren`t many people there. The German actor who had read was there with a woman and being disagreeable for me. Neil Gaiman I can hardly remember, I remember a thought far away that I thought he would look handsomer :D But indeed when I see photos now he does!

It was a hard year.
Artistically, creatively, concerning health and death itself.
I think there were many happy moments but wrapped up I achieved nothing that I wanted to.
All my ideas died slow deaths.
2016 I shall expect less and don`t end the year so disappointed, so stressed out but I feel afraid of the days to come.
I wish I could promise you great things to come here but I fear the lack of strength and time and weariness will succeed.
Eingestellt von Nathalie um 11:36 No comments:

Nathalie
Hi, I am Nathalie, short Natta. I am an avid drawer and painter as well. My preferred mediums are watercolours as well as ink pens and colored pencils. I have to try out every sort of paper and color nevertheless.